Scotland The Home of Golf

“The origins of golf are unclear and much debated. However, it is generally accepted that modern golf developed in Scotland from the Middle Ages onwards.” – Wikipedia. While the Dutch may claim to have invented the game, their 'kolf' was played with a leather ball on any open space including frozen lakes and canals. And despite similar claims by the Chinese (influenced by some ancient tapestry), modern golf, as we know it, was invented in Scotland with its first set of rules formulated by The Royal and Ancient Golf Club of St Andrews.

Scotland is simply The Home of Golf. And while there is much is to explore in this ancient country with its proud heritage, for golfers, it would almost be sacrilege to not play one of the traditional links courses that true aficionados swear by. Accentuated by glorious game history and tradition, visiting Scotland is nothing short of a pilgrimege for any golfer; although playing just those listed in the world’s top 100 would require more than two weeks at the very least. Thus, it is always advisable to divide and conquer the regional clusters in multiple installments.

Broadly speaking, the key clusters are Fife, boasting some of the most famous courses in the world including St Andrews, East Lothain near the gorgeous capital of Edinburgh, the South West Coast including Kintyre and finally the utterly romatic Higlands and Aberdeen. Each of these regions are also loaded with their unique tradition and character and there are numerous off the course activities such as castle watching, pub crawling or simply exploring the gorgeous countryside.

For such a relatively small country, one of the most surprising things about the Scottish climate is just how much it varies from one region to another. The western part has some of the wettest and windiest places in Europe, while the eastern coast from Aberdeenshire all the way down to Fife and the Lothians enjoy less than average monsoons. Scotland’s high latitude means that although winter days are short, during the summer months, the days are very long, often with an extended twilight.

The Kingdom of Fife was home to Scottish monarchs for 500 years that has managed to maintain an individual Lowland identity quite separate from the rest of the country. Its rustic villages and charming towns conspire to make it the land of so much to do and not always enough time to do it in. Fife's biggest attraction, St Andrews, has Scotland's most venerable university and a wealth of historic buildings. It's also, of course, the headquarters of golf and draws every golfer to drive from the first tee in front of the R&A Clubhouse on the Old Course. But beyond golf, there's much more to Fife that will spoil urban travellers, explorers, cyclists, museum-goers and foodies alike.

The third championship course at the Home of Golf, the Jubilee is considered by many to be the most ...

The New Course was the second golf course to be constructed at St Andrews and was named "The New" si...

The Kingsbarns Golf Links along the North Sea coast has its origins dating back to 1793. Lying betwe...

Having hosted eight Open Championships, one Ladies Open and one Seniors Open, apart from being the c...

The newest addition to St Andrews Links, The Castle Course opened in 2008 becoming the seventh cours...

The Old Course at St. Andrews is considered to be the birthplace of golf, with evidence of play on t...

With a spectacular setting above St Andrews, the championship The Dukes, St Andrews gives magnificen...

The former home of the Scottish Open, The King's Course at Gleneagles, is a masterpiece of golf cour...

A combination of stunning coastal views, centuries of history and hugely enjoyable golf is what make...

Host venue of the 2014 Ryder Cup, the first in Scotland in 40 years, The PGA Centenary Course at Gle...

When it first opened its doors in 1924, this magnificent countryside estate in the heart of Scotland...

A Week in Troon

Ayrshire is synonymous with golf and Robert Burns – and there's plenty on offer here to satisfy both of these pursuits. The world famous resort at Turnberry on the west coast of Scotland boasts two fine courses in a breathtaking seaside setting and there are few more memorable experiences than finishing your round late afternoon on the Ailsa course and afterwards enjoying a traditional Scottish banquet begun with a few lines of Robert Burns' poetry. Finally, the ardent golfer cannot hope to miss the links at Royal Troon (of Postage Stamp fame) and Prestwick, the latter being the birthplace of the Open Championship. The best way to appreciate the Ayrshire coastline is on foot: the Ayrshire Coastal Path offers 100 miles of spectacular waterside walking.

Founded in 1887, the 27 hole Kilmarnock Golf Club has had an illustrious history as an Open Champion...

Were it not for the fame of its famous sister at the other end of town, Prestwick St Nicholas Golf C...

Walk in the footsteps of Jack Nicklaus, as this is the course where he qualified for his first ever ...

One of Scotland’s gems and offering a traditional links challenge, Irvine owes much of its pre...

The Portland Course was opened in June 1895 although it was only in 1924 that the name was changed f...

The Troon Links is a collection of three excellent courses - Darley, Lochgreen and Fullarton which p...

Though a relative latecomer to the Open Championship circuit, the Old Course at Royal Troon Golf Clu...

Less than an hour from downtown Glasgow between Troon and Irvine on the Ayrshire coast, Glasgow Gail...

Regarded by many as the hidden gem of Scottish links, the Western Gailes Golf has hosted the Curtis ...

Prestwick Golf Club will forever remain etched in golf’s history; having been the venue for th...

Opened in 2003, Kyle Phillips designed a modern day classic links which has the feel of a course 100...

Piersland House is a stunning country mansion house style hotel in glorious grounds and gardens in A...

Just 10 minutes away from the Prestwick Airport, the Carlton Hotel combines a comfortable and relaxe...

Enchanting and exceptional in every way, Trump Turnberry has long been an iconic landmark on the spe...

Dark, mysterious and utterly compelling, The Highlands are the undoubtedly the most romantic part of Scotland. Known for its snow-capped mountains, rushing trout streams, superb malt whisky, the Loch Ness monster, warm hospitality and of course its world famous links courses, the Scottish Highlands are beautiful and instantly recognizable. Amongst its world famous golf courses with views to die for are Royal Dornoch and Castle Stuart which regularly feature on the bucket list of most professional golfers.

Close by, the oil capital of Europe, Aberdeen is arguably Scotland’s most under-rated golf cluster, despite being home to the 6th oldest golf club in the world – the Royal Aberdeen. Following closelyt on its heels is the magnificent Cruden Bay and the relatively new Trump International in the midst of some of the most magnificent dunes in the country.

Set amidst the great dunes of Scotland, Trump International embraces mile after mile of spectacular ...

Established in 1909 to the design of Archie Simpson, with later refinements made in the 1930′s...

Often called the “Ballybunion of Scotland” because of the mammoth dunes on the property,...

Stylish, sophesticated and chic perhaps adequately sums up thew elegance of The Chester Hotel that i... 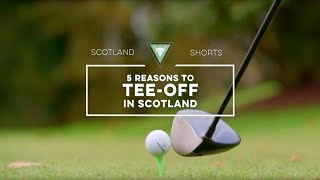 You May also explore